(From The Internet Archive - The Wayback Machine.)

BUDAPEST, June 18, 2002 -- As the suits gather in Budapest's Hotel Intercontinental, a dark cloud hangs over Eastern Europe and Central Asia. Since 1990, the World Bank Group has spent more than $7 billion in this region on oil, mining, and gas projects, and in between the salmon and the cakes the delegates are set to debate whether or not this program has helped the poor. At the same time, the Bank is considering a dangerous new loan to the Rosia Montana gold mine. A quick glance out at the Danube by the delegates provides an important lesson. 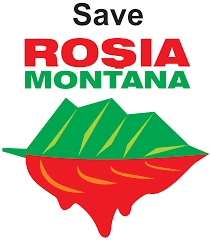 A year and a half ago, the Danube was devastated by the Baia Mare cyanide spill, which became known as the worst environmental disaster in Europe since Chernobyl. An estimated 100,000 cubic meters of waste containing cyanide and heavy metals spilled into the Tizsa and Danube river. Further into Romania - past the Tizsa and the riverine systems lies Rosia Montana - a valley traditionally inhabited by the Tara Motilor or 'Motz'. Beneath the valley lies more gold.

Gabriel Resources, the Canadian mining company, had a difficult mission. In 1999, after having been granted the right to mine gold in the Rosia Montana area, how could they attract financing for another potential disaster in the same region? They called in James Bond (the former Director of the World Bank's mining department) to deliver the goods. And although the IFC is still only considering the project, their active consideration has reassured private investors around the world.

The Concession license was granted without an open bidding process. The project is Gabriel resources first mining project and their CEO is a convicted heroin dealer - twice.

The whole project would negatively affect roughly 4500 people; 750 family farms and 138 apartments would have to be resettled in Rosia Montana alone. On the other hand, the IFC projects that at best, only 3,000 jobs would be created.

"The fact that the Bank is even considering funding this project shows that they cannot learn from the past or listen to the people. The people of Rosia Montana know that this project will be a disaster for their lives and their land" said Stephanie Roth of Alburnus Major - a local NGO opposed to the project.

The World Bank's Extractive Industries Review (EIR) is holding its Eastern European and Central Asian consultation all during this week in Budapest. Tomorrow feature: the Caspian Caravan

Gabriel Resources activities in Romania started in 1997. Frank Timis, the company's founder and chairman fled to Australia from Romania in 1978. By 1990 Mr Timis received his first fine and conviction for selling and supplying heroin. His second was in 1994. According to Mining Reporter Mr Timis holds a 12.5% interest in Gabriel with an option on three million shares. Frank Timis is also chairman, chief executive officer and president of European Goldfields , which trades on the Canadian Venture Exchange. He also has considerable interests in Deva Gold; a joint venture between Castle Europa (a Gabriel subsidiary with 60% of the shares), Minvest and three other state-owned Romanian companies to explore, develop and exploit the Certej, Zlatna, Bolcana and Baita-Craciunesti properties.

On April 1st 2002, Gabriel Resources appointed Mike Steyn as General Manager for the Rosia Montana project. Mr. Steyn was previously the Regional Manager of Gold Fields Ghana Ltd., where he was responsible for the resettlement of the 20,000 local residents and artisanal miners, in connection with the development of the Tarkwa gold mine. In 1999 nine people were shot and wounded by the police as thousands demonstrated against Goldfields Ghana for the mass lay-offs of its employees. The lay-offs were a result of the company shifting to open-pit cyanide heap-leaching mining in order to reduce operating costs. This very mine was the source of Ghana's worst environmental disaster in late October 2001. It was a spillage of thousands of cubic meters of mine waste water contaminated with cyanide and heavy metals; killing much of the river's life and leaving over a thousand people without access to drinking water.